Guatemala before and after

June 22, 2016 by Russell McFarlane in Uncategorized 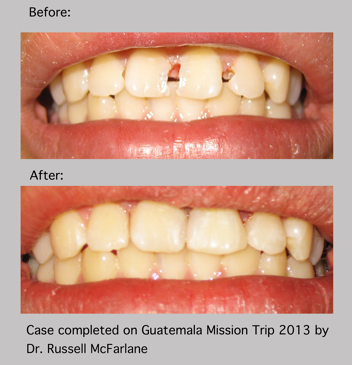 A lot of people think that when you go on a mission trip to Guatemala that you will do nothing but extractions and that the majority of your impact will be on the physical health of patients as you remove a major source of infection and inflammation from their body.

We treated 600 patients alongside a group of 33 Christians, comprised of 21 dental students, 3 dental hygiene students, 5 dentists, 2 hygienists (thank you Lisa and Prema for coming on this trip!!), and 2 assistants. Above I have included the before and after for one of the cases we treated. There were others like this. This patient had teeth like rotten apple cores in the front. Without treatment these teeth would have continued to get worse until they would be non-restorable. Instead, we were there in the rural community of San Raymundo at the critical moment to get in there and correct these teeth by removing the decay and placing esthetic composite resins.

Most of the patients we treated were small children. A few of the patients we treated were their care takers and people who work with the children. We took time to visit the University of Francisco Maroquin and learn about Mayan culture one afternoon. We met with the committee that runs the Christian school and hospital, where we were working. We made a little leisure time to play soccer with our local translators. FUN!! But, most of all we went to honor God. We served the children from 7:30 – 7:00. Long days out there in Guatemala. It was fun working alongside others with a shared goal in mind. We had dental units – with handpieces, and burs, and white filling material. One of the best things we brought was a hygiene team. All those components together serve to allow for high level care, not just pulling teeth in the jungle.

Above is a before and after picture of a patient completed by me (Russell McFarlane) in Guatemala 2013.

Fill out forms before your appointment.

Dentalia is a premium WordPress theme, designed for dentists and healthcare professionals. It can be easily customized as it's packed with awesome widgets, crisp icons and smart features.