What about small fractures? Or is there more to the story?

October 31, 2018 by Russell McFarlane in Uncategorized

Enjoy the before and after! 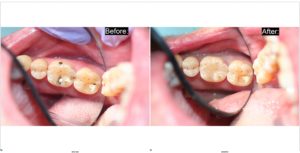 Patient could tell something didn’t feel right, it hurt initially, and a small piece broke off, but, then, the pain temporarily subsided. There was meaningful decay into the dentin in the area where the chipping occured. We removed the old amalgam, the caries (decay), and restored with a composite. Recurrent decay with associated fracture: #19 – DOB

He wore through the cusp tips from grinding. I did not extend the outline of the filling into the areas of erosion on those cusp tips, as the patient’s grinding was largely historic from having very large tonsils in his youth. He did not have his tonsils out until 18 or 19-years-old. The airway disturbance, akin to Obstructive Sleep Apnea, caused associated bruxism. If we did extend the outline of the filling into those areas, the tooth would be very weak and would require a crown and would be at high risk of fracture.

Fill out forms before your appointment.

Dentalia is a premium WordPress theme, designed for dentists and healthcare professionals. It can be easily customized as it's packed with awesome widgets, crisp icons and smart features.